Sioux City is Home of our Newest Branch 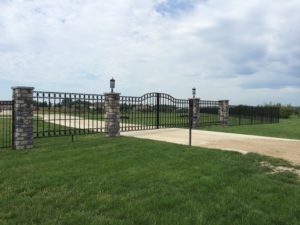 American Fence Company has notable history that began over fifty years ago. Two men with only a truck, a wheelbarrow and two augers founded American Fence Company, which quickly grew to a full fence installation operation. After making the bold decision to negotiate for full truckload quantities of fencing materials, we were able to stay competitive in our pricing. This strategy has caused our business to thrive and building 9 branches in 5 states. Our newest branch just opened at the beginning of 2019 in Sioux City, Iowa.

American Fence Company has been repairing and installing fence in Sioux City for a long while through our nearby branches. However, in 2018 we decided it was finally time to put a physical location in Sioux City to give customers our best possible service. Stop in and see us at 4700 South York Street in Sioux City, Iowa to get fence materials or get an installation quote.

To Sioux City, and Beyond

If you’re interested in your own free quote, please feel free to leave an online request or stop by our new location. Our estimators would love to discuss your project with you and help you find a fencing option that fits your requirements.